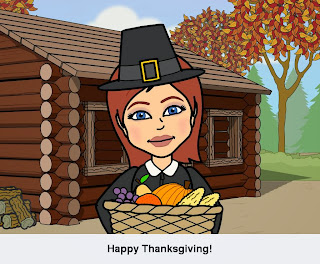 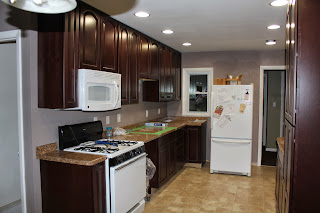 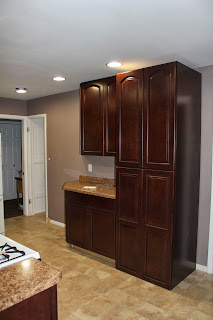 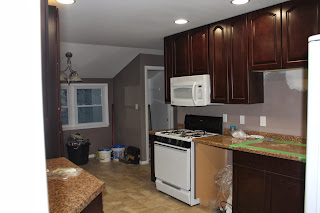 I keep thinking that in a couple more days, I’ll be able to post the final “after” shots of my remodeled kitchen.  I’ve been thinking that for a while now.  It ain’t happening.   There’s work being done, slowly.  The weather has caused some delays, because one of the things I’m having installed is new windows.  We had rain for just about a solid week.  Not only did the rain impede the new windows going in, it added to the drying time on the drywall mud.  There are delays off site, too.  The cabinets I picked out at the end of September, the ones that were supposed to take two weeks to come in, are still not here.  And they won’t be, until sometime next week.  Hopefully Monday, but that remains to be seen.  Back in August, we hired an electrician to put in new lights and start the rough-in for some new outlets.  He was paid for the work that was done at that time, and we told him we’d let him know when the old cabinets came out so he could finish his part.  Well, the cabinets are supposed to come out tomorrow, and I have contacted him and left messages, but haven’t heard back.  So the carpenters might end up waiting on him.  That remains to be seen as well.  Meanwhile, Walker and I are relying on frozen dinners, frozen breakfast, and in my case, peanut butter and jelly sandwiches and yogurt.  I was buying fruit, thinking that was a good way to get something healthy that doesn’t need to be cooked and won’t make any dirty dishes.  Then, when the drywall dust started flying, I realized we’d have to wash the fruit in the bathroom sink, and, well, that just skeeves me out.  So I quit buying fruit.  We eat from paper plates with plastic utensils and drink from red Solo cups.  At first, one of us would start singing when the cups came out.  That got old a while ago.  And all that plastic going into the trash each day must have my extremely eco-friendly father rolling in his grave.  Well, he doesn’t actually have a grave, since we cremated him and scattered his ashes on a very windy day in a park that was technically not open to the public.  Hey, we left without complaint when the police showed up.  But I digress…..

So anyway, though there isn’t much change since the last batch of photos, here’s where we’re at with the kitchen remodel: