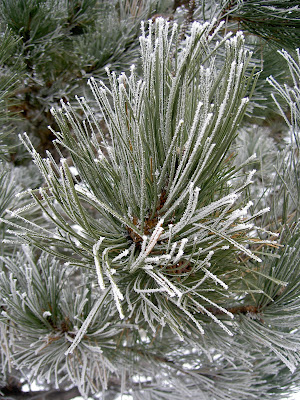 Walker and I were running errands the other day when I noticed fog floating in from the direction of the river. The temps had been way below zero for a few days, and when I saw the fog I suspected we were in for some hoar frost. We finished our errands quickly and headed straight for home.

Hoar frost occurs when water vapor, such as fog, touches a very cold surface and freezes on it instantly. This can happen to any object that's cold enough for the water vapor to freeze on. It doesn't happen a lot around here, though. When it does, I grab my camera and head outside because it doesn’t last long. But what a beautiful sight while it lasts! 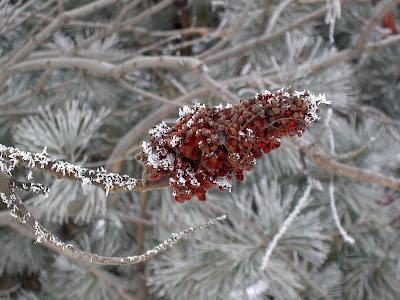 On a recent trip to California, Walker and I drove to the ancient redwood forest known as Muir Woods. We lucked out – it was Veteran’s Day, and admission to this national park was waived. Wahoo! The forest was cool, shady, and quiet except for bird calls and the sound of water bubbling nearby. Thirty minutes or so into our walk, we came to a footbridge over this little stream. 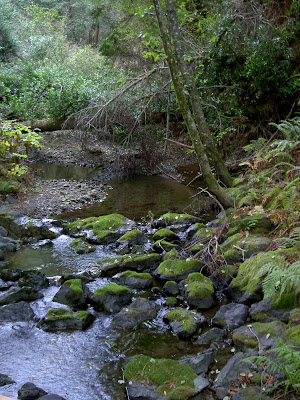 Back to Second Grade

A couple years ago, Walker and I became the proud temporary foster parents of a paper doll named Flat Stanley. For those of you who aren’t in touch with second grade curriculum, Flat Stanley is a character in a book who suffers an injury that leave him, well, flattened. He decides to make the most of his new shape by mailing himself to folks around the country. Cheapest way to travel, that’s for sure!

So the idea is, a child you know mails you their Stanley and you spend a few months taking him around your area, shooting photos and sending them along with letters and postcards back to your kid-friend. The kid then shares with their class, and they get to learn about different parts of the country and even, sometimes, overseas. Some classes try to get their Stanley around the world during one school year.

My Stanley came from my cousin Christian, who I actually think of more like a nephew. And anyone who knows me also knows of my quest to become the Coolest Auntie Ever. Which means, of course, that a few postcards were not going to cut it. Walker and I had talked briefly of visiting his mom in Orlando, and what Stanley wouldn’t like a visit to Disney? Off we went. Stanley not only sent back postcards, but when we returned home we typed up his adventures, complete with photos, and sent them in with several packages of Disney pencils to share with the class. Stanley then accompanied a co-worker on a cruise to Hawaii. His travel log for that trip was bound into a book and sent to the class with a big box of leis.

By this time we were really getting into the whole Stanley thing. I mean, pretty much every where we went someone would recognize him and comment to us. How fun is that? Unfortunately, Stanley had to be back at the school before the end of the term. We sadly sent him back the first week in May.

This year, Christian’s little sister started second grade. We pestered her until she got her teacher to agree to send us a Stanley. Seriously. The class hadn’t even gotten that far yet and we made the poor kid bug her teacher til we got our paper doll. Then the adventure began. Our first stop: San Francisco! We spent a few days touring the city, then traveled down the coast a few miles to Pacifica. And here's Stanley at the beach outside our hotel. 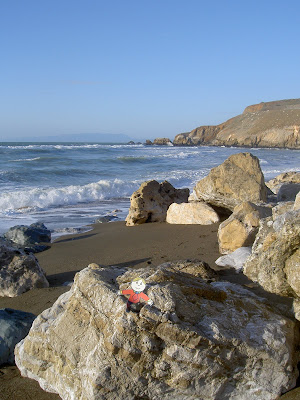