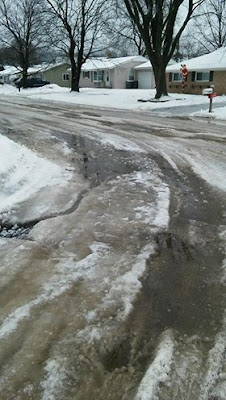 It's not uncommon, in the Midwest, for this time of year to feel as if Mother Nature is possessed by some evil bipolar gremlin.  After spending a weekend outside in sunshine and 60 degree temps we often wake to a Monday morning snowfall of several inches.  This year, the worst of all demons has been at play:  ice.

My mother will be 80 this year, and spent most of 2016 recovering from knee replacements in both legs.  She has been cooped up more often than not by ice storm after ice storm.  The first one was sandwiched in between snow and rain, making the resulting ice field several inches thick, everywhere. There is just no good way to clear that.  Shovels simply don't work.  Salt works, if you use enough of it, but it takes time.  Days, in fact, when the ice is that thick.  And it is hard on animals and cars and concrete and lawns when the residue gets plowed up with the next snowfall.  So our town more or less shut down until an unexpected January thaw melted everything away.  Until it happened again.  And again.

You can't fuss about the weather when you live in the Midwest.  There just is no point.  But still, after all this mess, there is more than a little excitement to see the first green, followed very soon after by the first tiny splashes of color. They are early this year, but we are no less excited to see them.  Behold the reward for enduring another long, gray winter: 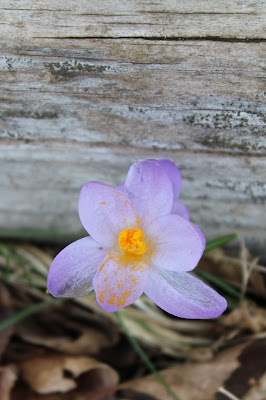